Storm Gareth leads to a spate of scaffolding collapses

Mid-March saw extremely high winds hit, as Storm Gareth blew across the UK, leaving disruption and damage in its wake. A number of reported incidents of scaffold collapses came as a result of this high wind, highlighting the necessity of for a well planned and executed approach to safety. 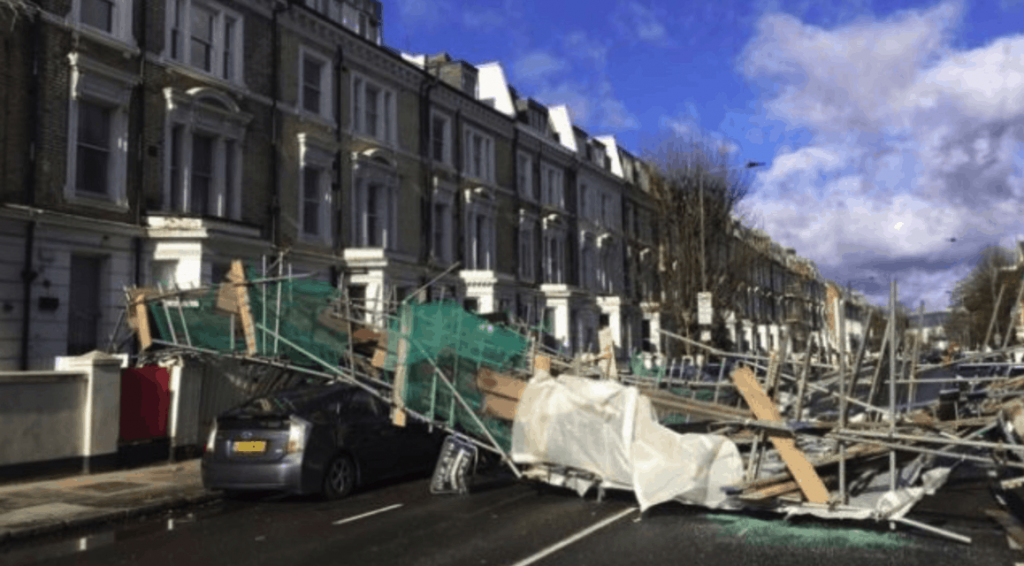 Three separate incidents in London gained the attention of the Health and Safety Executive, causing the organisation to issue a strict reminder on scaffolding safety.

The first incident occurred in North London, when 200 square metres of scaffolding came down opposite the Royal Free Hospital, whilst the second incident, two days later, saw scaffolding collapse in Kensington, landing on parked cars below and very narrowly missing pedestrians passing the scene. The third incident occurred once again in Kensington, a day later, which saw temporary roof scaffolding dangerously swaying in the high winds of Storm Gareth, ultimately causing damage to a chimney and window.

Luckily no injuries have been reported from these incidents, however this could have been a very different story had pedestrians or workers been closer to each incident. Following all three incidents, the Health and Safety Executive (HSE) tweeted the following message:

Ensure your scaffolding is stable and safe: follow our scaffold design checklist at https://t.co/5WrQSNRZz8 pic.twitter.com/7yqYQuxx6A

It is incumbent on the scaffolding industry to ensure that their scaffolding design, construction and maintenance is executed with the highest level of diligence at all times, and this includes inspecting a structure following situations that may have impacted upon its safety (i.e. high winds).

It’s often the case that the media report such collapses as being ‘caused’ by the wind, but those in the industry will be aware that it almost always the case that an adequately designed, constructed and inspected scaffold will withstand the very worst that the UK’s weather can throw at it.

The resources section of our website contains a toolbox talk titled, Working in Windy Conditions, it’s free to download and would be handy way of reinforcing what is required of a scaffolding workforce to ensure the required levels of safety are reached.

Contact the Simian team today to find out more about our training, consultancy and inspection services.