SIMIAN were on hand at a recent British Forces Resettlement Services’ (BFRS) military careers event at Tidworth Leisure Centre in Wiltshire,  at which Armed Forces personnel were introduced to some of the excellent scaffolding industry career opportunities that await when they return to Civvy Street. 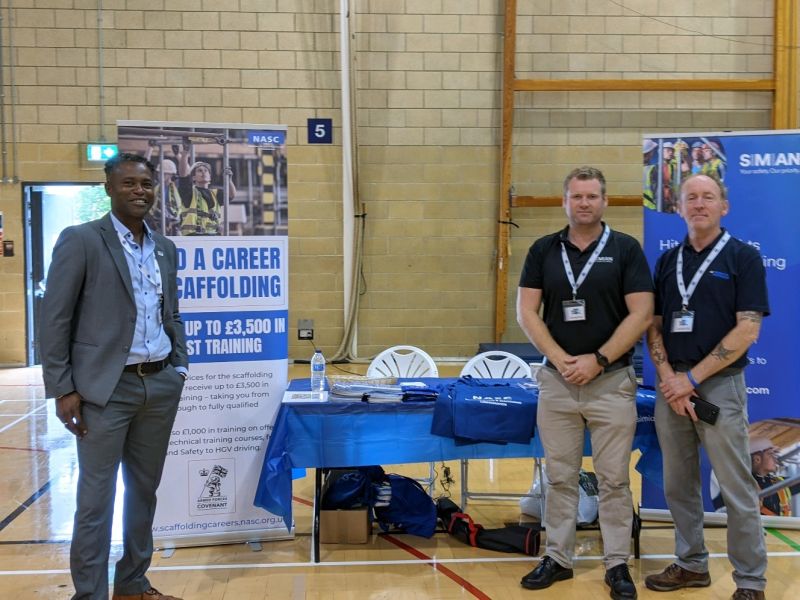 More than 100 current service personnel stopped by the NASC stand, where they were greeted by NASC Training and Recruitment Officer Henry Annafi, and SIMIAN’s Business Development Manager for the south-west, Rob Wolstanholme. Also present to lend their support were representatives from NASC members, Severnside Scaffolding Ltd and S & K Scaffolding Ltd. The event was one of many ‘Military to Civilian‘ Events, where BFRS aims to offer the Armed Forces Community the chance to meet employers, find jobs, access self-employment opportunities, enrol in training schemes, and get in touch with a whole raft of support services specialising in the transition from Military to Civilian life.

Speaking of the event, Henry Annafi said: “It was great to see such interest and enthusiasm shown by so many serving Armed Forces personnel. They were very impressed by the structured and progressive nature of the CISRS scheme – and the NASC’s Armed Forces Training Fund, which will fully cover the costs of retraining and qualifying as a scaffolder, which comes with a fantastic variety of work, camaraderie and excellent earning potential. It was great to have Rob’s expertise on hand and I’m happy to report that all visitors had a positive experience, and we’re already looking forward to the next opportunity.”

Rob Wolstanholme said: “It was an honour to be able to support this NASC initiative, as it mirrors SIMIAN’s aim to work for the greater good of the scaffolding industry, and the fact that it will benefit service personnel too, means it’s win, win! Those present now have more food for thought in terms of their future career options and it’s great to have played a part in that.”

Customers, or indeed armed forces personnel requiring more information are free to contact us via hello@simian-risk.com, and we will direct your enquiry to Henry and Rob. Future BFRS events can be found at this link.