At the end of July, six members of the SIMIAN team will be tackling the 23-mile, 11,178 feet ascent of the British Isles’ three highest mountains, in support of CALM – Campaign against Living Miserably.

This charity has been chosen to raise vital awareness for the subject of male mental health and suicide prevention. This is an issue that hits home with a number of members of the SIMIAN team, speaking of this chosen charity, SIMIAN Instructor, Isaac Morrison has said:

“This is a topic which through personal experience and loss of loved ones, I felt I had a calling towards and a mission to change the perception of.

I was out on an inspection with my colleague, Dean Butler. We had completed the site visit and were in a coffee shop sitting down for some breakfast and preparing to get the report hacked out. It was Dean’s first time shadowing me and the first time we had met in person so the topic of conversation quickly moved from the site visit to general chit chat about life, sport, family the usual stuff and before we knew it the report was on the back burner.

As we were chatting, we spoke about some of the books we were reading many of which had a similar theme, personal development and challenge! Within an hour of us sitting down the idea had been born and the email sent out. The challenge was on and we had half the company on board. We finished the report and headed back to the car and discovered we had both been booked for overstaying our parking!”

The team taking part in the challenge includes Mike Dean, Dean Butler, Dave Burrows, Susan Russell, Ian Corcoran and Jamie Lyons, with a number of other team members making the journey to Snowdon to join our ‘Three-Peakers’ on their final leg. 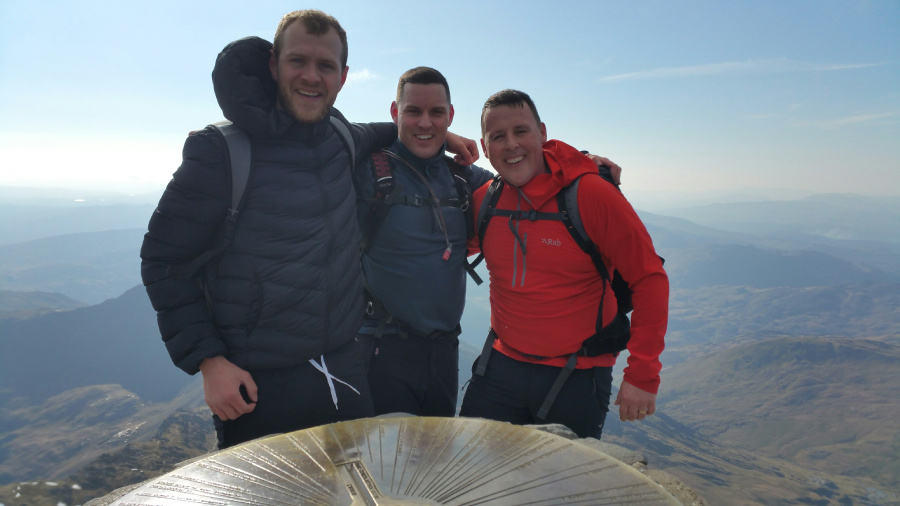 Their challenge will begin on 26th July by climbing Ben Nevis at around 17:00, and once completed, making the six hour drive to Scafell Pike and starting the climb at 06:00, to return at approximately 10:00.  This will leave the team seven hours to travel down to North Wales and tackle their last climb at Snowdon before the deadline of 17:00 on 27th July.

On behalf of the SIMIAN team we would like to commend our Three Peaks participants and wish them luck in completing their challenge for such a fantastic cause. If you would like to support our team in tackling this challenge, the intrepid bunch have set up a Just Giving page to raise funds and any donations you can provide will be much appreciated!