Simian and the National Access and Scaffolding Confederation have combined to help a former soldier take the next step in his career in the scaffolding industry.

Trainee Scaffolder, Liam Gibbons, who struggles with PTSD and has been living in a veterans’ care home, reached out for assistance through NASC’s social media streams.

He wrote: “I read with interest that the NASC is keen to encourage more ex-Forces personnel to take up positions in the scaffolding industry and had launched a fund to help them with training.

I became a Scaffolder, starting at the bottom and have worked my way up from a labourer to a qualified part one scaffolder.

My second trainee card is close to expiring so I need to complete the Part 2 Scaffolder course as soon as possible. I was wondering if there is any help available towards this next step. I Just wondered if there was anything you could do for me.” 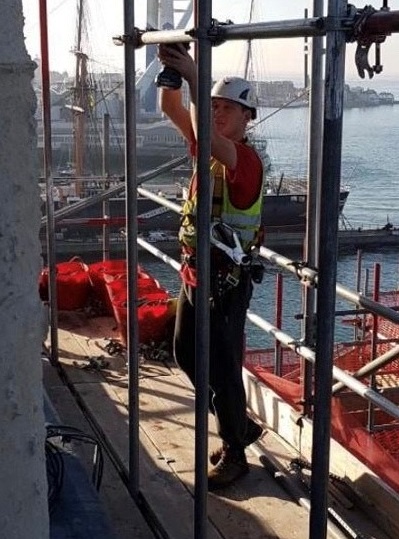 Liam’s appeal struck a chord with the NASC’s new President Lynn Way, of Chris Sedgeman Scaffolding Ltd, who has made engagement with armed forces personnel  core objectives of her presidency and as a result, arrangements were made to arrange for Liam to undergo his CISRS Part Two Scaffolder training, at Simian’s centre in Leytonstone, East London, in January 2020 and his Level Two NVQ, in the months following.

Mrs Way said: “I am passionate about helping former Armed Forces servicemen enter the scaffolding industry and then progress through the training stages, wherever I can. This is why we decided to help Liam on a strictly one-off basis.

“We’ll soon be in a position to help many more ex-military personnel achieve the same progress as Liam through the NASC’s dedicated £150,000 training pot. We’re also working hard to further strengthen our ties with the Armed Forces, ensuring that current servicemen are aware of the varied scaffolding industry careers that are available to them – many of which complement their skill sets – and can put their repatriation funding allowance towards scaffolding training.

Simon Hughes, Simian’s MD, added: “SIMIAN is delighted to support the NASC to progress Liam within in the sector. The ex-military initiative is one we fully support and we wish NASC and those that it encompasses, the very best of luck.”

Through the NASC’s dedicated Armed Forces training pot, NASC member businesses can claim up to £1,000 towards the retraining or upskilling of an ex-forces employees.

Eligible candidates can either be in the process of leaving the Armed Forces or could have left in the past five years and they are eligible for all CISRS courses.