Home > All News > Scaffolding Collapses on to Double Decker Bus

An accident involving a scaffolding collapsing on to a double decker bus in South London could have been much worse.
Disaster was averted when the incident occurred in Peckham, South East London in the middle of the morning. The bus was in service at the time and was on its route on a busy high street so it is particularly lucky that the bus broke the scaffolding’s fall and no one was injured. The road was closed for a brief period but despite some disruption the impact of the accident was minimal. A spokesperson for London Fire Brigade said at the scene that it was a miracle no one was hurt.
The address of the incident didn’t pass us by and rumours that Del Boy and Rodney may have been involved are, as yet, unconfirmed! 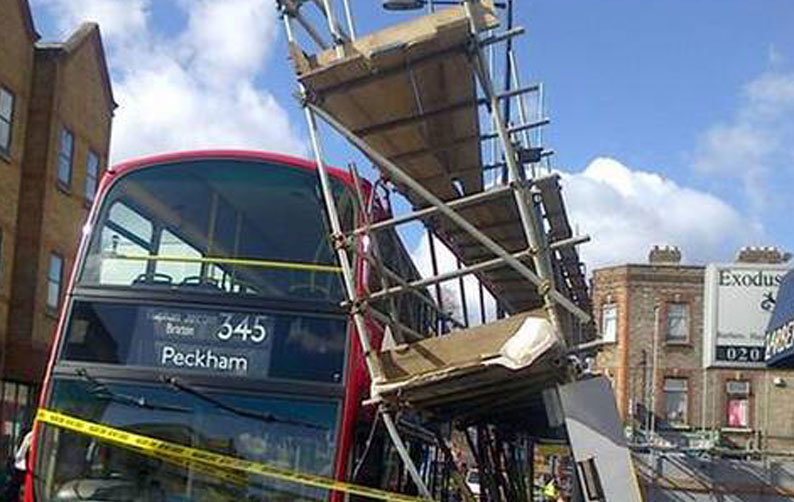 This incident serves as yet another crucial reminder of the importance of ensuring scaffolds are adequately anchored – particularly those that are sheeted. The frequency of these incidents (we see more than you would imagine!) highlights the need for inspection to check for any damage or instability that may have been caused by bad weather, third party interference or any other event that may have affected the scaffold’s strength or stability.
Simian Risk offers an independent inspection service along with advice and consultancy and supports many scaffolding businesses that are intended to prevent incidents such as this one. We can assist with scheduled or ad-hoc inspections and provide a third party, expert opinion. Give us a call on 0345 602 2418 for more information.
Read more on the scaffolding collapse here