Emergency services were called to a scaffolding collapse in Eastbourne on the 9th September. The scaffolding tower, which had been erected next to a block of flats had collapsed in a residential area. It was left leaning precariously against a tree, which broke its fall, and saved the scaffolding from collapsing onto the pavement and road. Fortunately, no one was hurt in the incident. 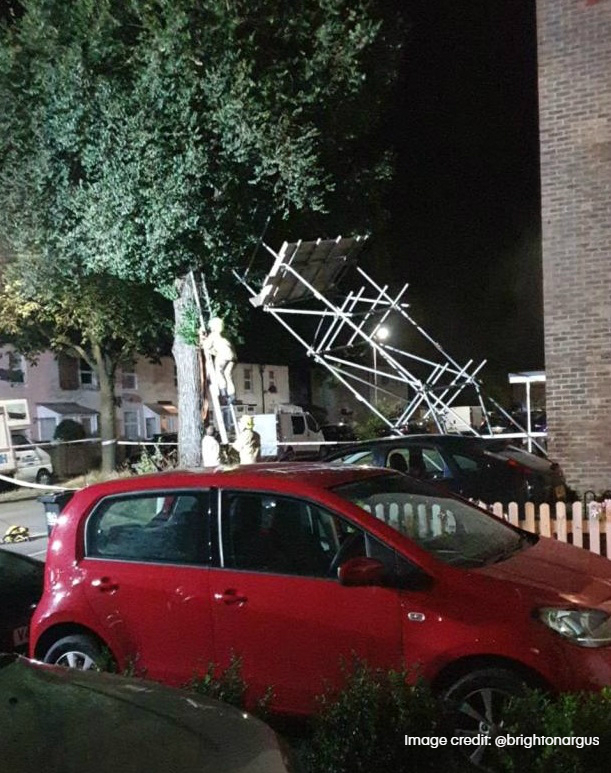 The incident occurred at around 11.30pm so thankfully the road was quiet but the surrounding area had to be cordoned off and local residents were given advice by the emergency services to help keep them safe.

Fire crews were unable to dismantle the scaffolding safely so it was secured until a scaffolding company was able to attend.

Whilst we don’t know the exact cause of the scaffolding collapse, it’s very likely that inadequate stability measures were implemented and it serves as a timely reminder that careful scaffolding planning, inspections and maintenance are all vital to ensure the safety of those involved in working at height as well as the safety of the general public.

Information on scaffolding anchorage is available in NASC’s TG20:13 Operational Guide and their free publication, ‘TG4:19 – Anchorage Systems for Scaffolding’.

For further details on SIMIAN’s scaffolding consultancy and inspection services, please contact our team today on 0345 602 248.