The NASC has announced their qualifying the Workforce (QTW) 2014 programme will begin this week.

NASC members will be able to apply to for a payment of £125 for any of their employees that have qualified to CISRS Scaffolder, Advanced Scaffolder or Scaffolding Supervisor status since 1st September 2013. The operatives will need to have completed all requisite training and be in possession of a current valid CISRS card to be eligible. 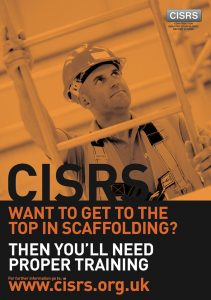 This will be the third time NASC have run a QTW programme supported with the aid of funding obtained through CITB. Both the 2012 and 2013 QTW programmes were very successful – with over 200 NASC member operatives being trained and qualified to CISRS Scaffolder, Advanced Scaffolder or Scaffolding Supervisor grade in each period.

During this time, the NASC has made payments of around £50K back to the members through the QTW funding. “CITB are very pleased to be supporting the NASC through the Qualifying the Workforce programme. They have exceeded their target in the two previous years, and we hope they can keep that successful momentum going in 2014. Well done to all those NASC members who participated,” said Paul Gaze, CITB Specialist Federation Support Manager.

In September 2013, CISRS introduced a CISRS Operative Training Scheme (COTS) one day training course requirement, for those applying for a CISRS Scaffolding Labourer card or an initial New Entrant Trainee Scaffolders card. NASC will make up to 50 payments of £125 to employers who have put their operative through this new course and have obtained a CISRS Labourer or CISRS New Entrant Trainee card via this process.

The NASC states that it is important to encourage the take up of this new requirement of formal training for scaffolding labourers, which will be in line with changes to CSCS scheme rules concerning labourer qualifications, to be introduced later in 2014.

Dave Mosley NASC Director of Training said: “The scaffolding industry is one of the most proactive and supportive when it comes to operative training and qualification. A qualified workforce is one of the cornerstone principles of NASC membership. We appreciate that achieving this takes considerable time and expense on the part of the members and it’s great that we can offer some small financial reward to them thanks to the QTW programme.“

If NASC members are looking to take advantage of the QTW programme they should visit the NASC website: www.nasc.org.uk.