Home > All News > Apprenticeships > Keeping it in the Family

Keeping it in the Family

17-year-old, Nickolas, a  Waltham Forest resident, has started his scaffolding career journey, and has set his sights on keeping it in the family!

Nickolas, who has completed his secondary education, decided to join his Father in the family, and enrolled on a scaffolding apprenticeship at Simian’s London Academy of Sustainable Construction (LASC). 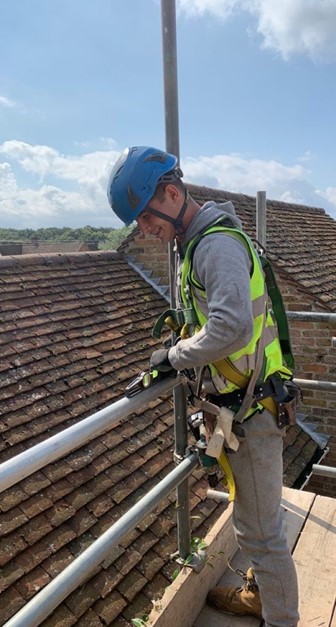 Nickolas is in the early stages of his apprenticeship, and he is currently attending the Part 1a element of the apprenticeship programme, where he will be learning about scaffolding fundamentals, including practical sessions on tower and independent scaffolds.

Speaking of his move into the scaffolding industry, Nickolas said,

“My Dad is a Scaffolder and runs his own business, so I already have a fairly good idea of how the industry works. I decided I wanted to get my qualification as a Scaffolder, and work alongside my Dad, and in the future, maybe I will take over the business.”

I already work with my Dad, but getting the chance to work alongside other apprentices in the training centre, under the tuition of Simian’s expert instructors, has given me more confidence to get involved on site, and be the best that I can be.”

To find out what the scaffolding apprenticeship programme entails – get in touch by calling 0345 60222418, or by emailing hello@simian-risk.com.