Home > All News > How has scaffolding safety progressed over the years?

How has scaffolding safety progressed over the years?

For scaffolding operatives across the globe, safety is of the upmost importance. Over the past few decades safety amongst the profession has vastly improved.

To put into perspective just how much this has improved we can look at NASC Accident Figures from the past 40 years. Take for example 1977, during this year there were an astounding 700 incidents in the UK alone, fast forward four decades and this number has fallen by 87%, with just 89 reported incidents in 2017.

Even to this day safety procedures, guidance and equipment are continually changing and improving, thus ensuring that accident rates continue to decrease and scaffolding professionals are able to work safely and effectively. Some of the biggest innovations and changes include the development of scaffolding materials as well as effective training techniques and guidance issued by industry bodies.

The progression of scaffolding safety

Scaffolding in the early 1900s was very different from modern erections, consisting of a wooden or bamboo structure, tied with rope (this is a practice still used in many countries). When metal scaffolding was introduced, rope was deemed ineffective; this led to brothers Daniel and David Palmer-Jones introducing fixings named ‘Rapid Scaffixers’ which could be used to hold together both wooden and metal scaffolding. Six years later the brothers improved their design and invented the Universal Coupler, still used in scaffolding to this day. 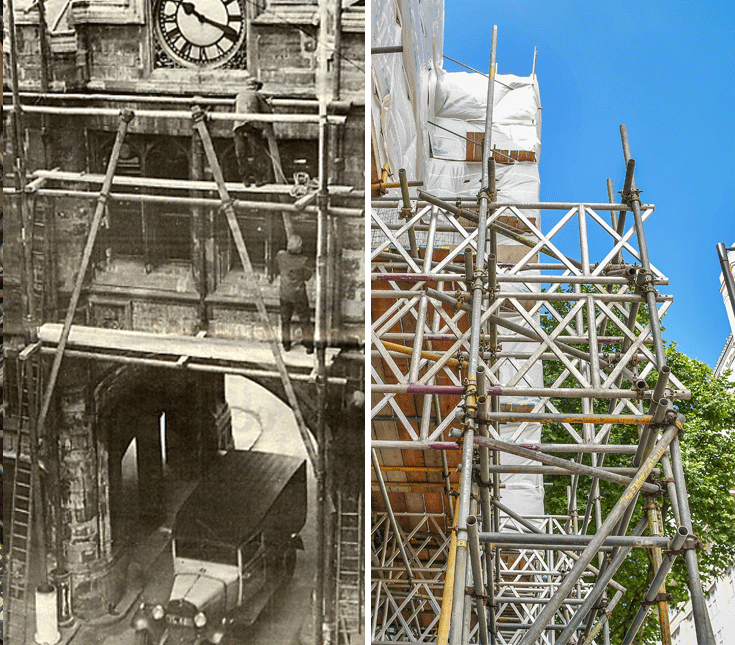 Health and safety has come a long way for all industries, but particularly for the scaffolding profession, in which safety considerations must happen on a near constant basis, effective guidance for professionals as well as strict legislation is vital. The National Access and Scaffolding Confederation (NASC) was founded in 1945, in order to provide effective guidance to scaffolders on how to operate safely whilst working at height as a trade body for the UK scaffolding industry and over the years, it has evolved to become the world’s most widely reputed authority on scaffolding matters. The organisation’s safety standards have become the benchmark for scaffolding performance and they are the go-to point of reference on scaffolding safety matters across the globe.

With a long history in the scaffolding industry, the SIMIAN team has seen first-hand the significant strides made towards improving scaffolding safety. We have dedicated our time to supporting scaffolding and construction businesses to operate efficiently and safely, on both a national and international scale.

From a scaffolding perspective, this support extends to a whole range of training and consultancy support and for businesses who are specifying scaffolding, i.e. those in the role of Principal Contractor, we can provide a scaffolding supply chain support service that extends from initial capability assessment through to specification writing and ongoing monitoring.

If your business is looking for support, please contact the SIMIAN team today on 0345 602 2418, to find out how we can support you!