Home > All News > Firm Fined After Scaffold Blows Over

Firm Fined After Scaffold Blows Over

An event we reported at the start of the year has hit the headlines after the firm involved were hit with a £10k bill after a scaffold they were dismantling blew over in a City Centre street in high Winds.

Leicester Magistrates’ Court heard how on 28 January 2015 the  firm was dismantling scaffolding on Charles Street in the city when the incident occurred. The scaffold hit a bus, landed on a parked van and hit two members of the public. 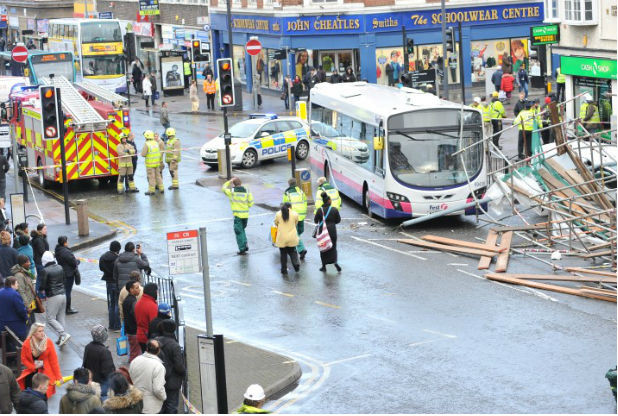 An investigation by the HSE into the incident, found that the company was not following a safe system of work. The scaffold was untied  and sheeting was left in place. Dismantling had taken place over four days and the firm’s workers had failed to check the scaffold before they started work.

The firm involved was fined a total of £8,000, with costs of £2,000 after pleading guilty to offences under Regulation 28(1) of the Construction (Design and Management) Regulations.

Speaking after the hearing HSE inspector Martin Giles said: “Scaffolding needs to be tied to a building and dismantling needs to be properly planned and carried out in a safe manner.”

As is often the case, the media widely reported this as being the result of high winds. This is only partly true as any scaffold tied in accordance with the NASC standards  TG20:13 ‘A Guide to Good Practice for Tube and Fitting Scaffolding’ and TG4:19 ‘Anchorage Systems for Scaffolding’ will withstand the very worst that the British weather can throw at it.

As  the winter months draw in and with that the ongoing possibility of high winds, we urge clients to take the relatively simple steps of making sure scaffolds are adequately anchored and a thorough pre-use, weekly and post-modification inspection regime will go a long way to ensuring that this is the case.