In the year to March 31 2016, 46 company directors and senior managers were prosecuted for breaching the law by the HSE, the independent regulator. This was up from 15 in the previous year, according to Freedom of Information figures obtained by Clyde & Co, the law firm. 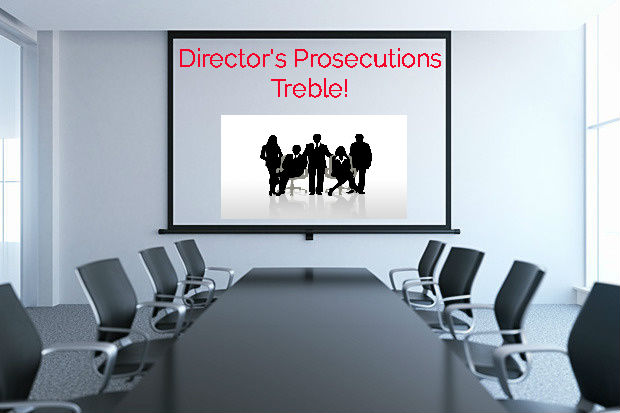 Almost all the cases involved the injury or death of an employee and many involved the construction industry.

Chris Morrison, UK head of safety, health and environment at Clyde & Co, said: “The data confirms what we have been seeing in practice with the HSE displaying an increased zeal to prosecute the most senior individuals. By making senior management responsible for the health and safety failings of their business and their staff, the increased enforcement is a serious boardroom issue.”

The biggest impact is on companies in the “medium” sized category with turnover between £10m-£50m. These businesses are seeing fines removing a higher proportion of their turnover than any other business group.

We published an back in October, in which we highlighted the effects of the new sentencing guidelines for health and safety offences.  Speaking about the guidelines, Mr Morrison said, “The definitive guideline on sentencing health and safety matters is biting hard, but there is unquestionably more pain to come. We already know the Court of Appeal has paved the way for fines equal to 100 per cent of a business’ pre-tax net profit with what appears to be a desire to bring regulatory criminal fines in line with financial services fines.

After decades of relatively stable and predictable fines, the tide is now rising rapidly as the new guideline is applied by the criminal courts. The worrying thing for company directors is that fines are now routinely hitting the £1m mark for non-fatal offences and even those where nobody has been injured, meaning that any breach of the Health and Safety at Work Act 1974 is now potentially a serious threat to a company’s bottom line.”

Although Health & Safety features as a standard item on most Boardroom meeting agendas, the current shift in the level of fines and the types of individual being prosecuted mean it should now rank equally with all other matters discussed, even if the motive is one of self-interest.