A Scaffolder who was seen working at a height of approximately 20m without using any fall protection measures,  has been spared jail after a court heard that his actions were ‘a moment of stupidity’. Terrance Murray, 27, of Blackburn, Lancashire was given a six-month suspended prison sentence with 100 hours community service and order to pay £615 in costs and victim surcharge. 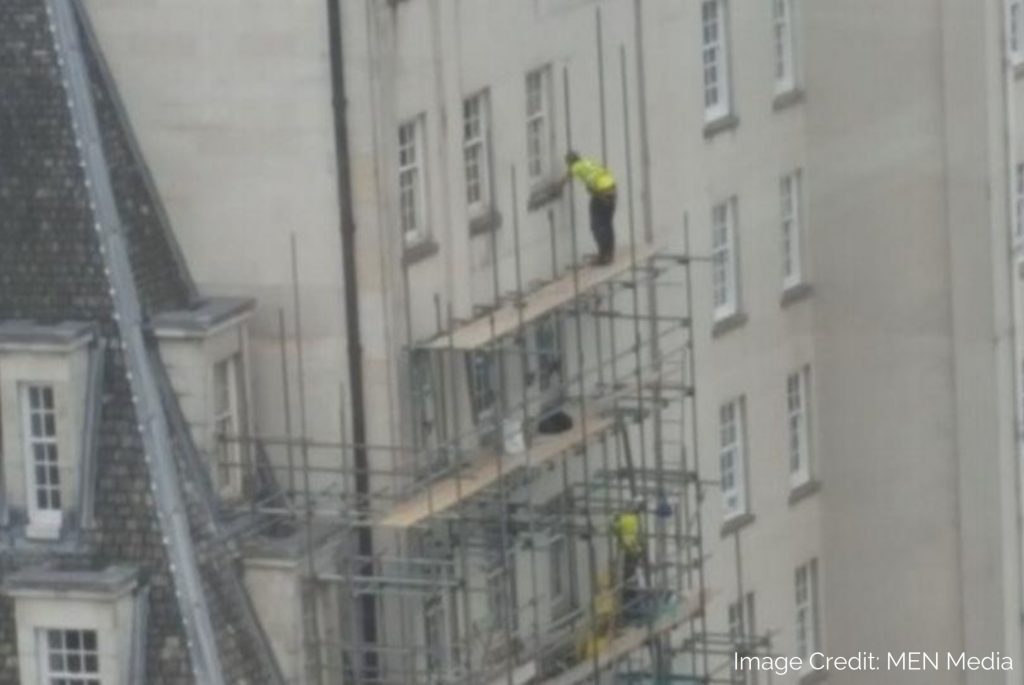 During the case at Manchester Magistrates Court, Murray was told that his actions on June 30 2017, posed a risk to himself and to others during scaffolding work in Manchester City Centre. Murray, who was wearing a safety harness which was not attached to the scaffolding, made his way safely down from the scaffold, only to learn later that his actions had been spotted by a former HSE Inspector, who took a photograph of Mr Murray peering through a window of the Grade II-listed Sunglight House in Quay Street.

Prosecuting, Seb Gomez said Murray, who no longer works in scaffolding, had been given the correct safety equipment and was not under pressure to complete the scaffolding work quickly and added, “We believe it would have been more than reasonable to expect Mr Murray to follow his ample training and eight to nine years of experience to carry out his job correctly rather than deliberately cut corners for what was in effect, little real gain other than time.”

Gareth Price, defending Murray, said,  “There is no evidence of this being part of endemic practice and it appears to be a one-off moment of stupidity.”

In his summing up, District Judge, Mark Hadfield, said, “The immediate risk you were creating was to your own safety and to that of others. If you were to lose balance the risk was others could have been injured, potentially fatally.”

Speaking after the case, Matt Greenly of the Health and Safety Executive said,  “This result goes to show the HSE will prosecute where we see people being put at risk or killed. We are grateful to the court for recognising that, while no one was hurt, the potential risk of harm or death was very real.”

Falls from height remains one of the biggest causes of workplace fatalities in the UK and the Work at Regulations 2005 are specifically intended to prevent death and injury for those that work at height. The National Access and Scaffolding Confederation (NASC) has produced comprehensive guidance for Scaffolders in the form of SG4:15 ‘Preventing Falls in Scaffolding Operations’, and this is available for free download from the NASC’s website.