The Health and Safety Executive (HSE) released figures on 4th July, detailing the UK’s annual workplace fatality figures for 2017/18, with numbers highlighting a worrying increase in the number of construction worker deaths during this time.

Figures show that fatalities across all industries have risen, with 144 workers fatally injured in the twelve-month period between April 2017 and March 2018. Construction again accounts for the highest number of fatalities, with 38 worker deaths recorded, following closely by the agriculture industry (29), manufacturing (15), transport and storage (15) and waste (12), with 35 further deaths linked to other industries. 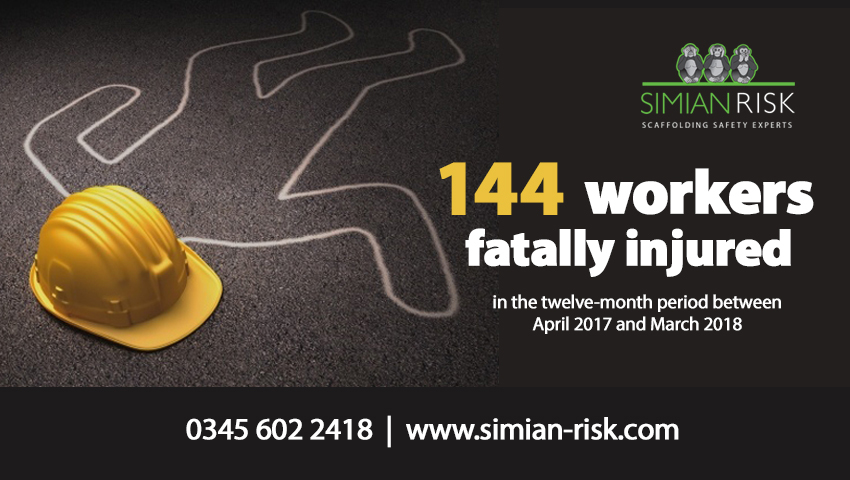 With regards to how worker fatalities occurred, unsurprisingly, the highest number of deaths came as a result of falls from height which accounted for 35 out of 144 workers killed. Following this, there were 26 deaths as a result of a worker being hit by a moving vehicle, 23 struck by a moving object, 16 trapped by something collapsing or overturning and 13 by contact with moving machinery.

Over the past five years, the average rate of construction deaths has been four times as high as the rate across all industries. Chair of the HSE, Martin Temple, discussed concern that the figures have increased over the past 12 months, despite the UK’s health and safety record being the ‘envy of much of the world’. Mr Temple said, “published in the same week as the 30th anniversary of the Piper Alpha disaster, the figures serve as a reminder of why health and safety is so important and that we must not become complacent as we continue our mission to prevent all forms of injury, death and ill health at work”.

With an increase of nine deaths from figures released in 2016/17, the HSE emphasises that the number of fatalities across industries have remained relatively level in recent years. Furthermore, figures highlight a substantial and long-term reduction in fatalities since 1981.

The key to ensuring workplace accidents and fatalities are avoided is gaining expert advice, guidance and training on best practice procedures for a particular industry. It is an employer’s legal and moral responsibility to ensure their workforce is trained and able to work safely in their role.

Here at Simian we specialise in training and consultancy for work at height. Contact our team today to discuss how we can help your business to guarantee high levels of health and safety at all times.