The Health & Safety Executive has released the provisional figures for UK work-related fatalities in the UK for 2015/2016.

The statistics show that 43 construction workers were killed in the workplace in the year to 31st March 2016, this was the highest in any industry sector, and an increase of 8 during the same period in 2014/2015. Statistics for UK industry fatalities as a whole also increased from 142 in 2014/2015 to 144 in the latest period. However, the long-term trend has seen the rate of fatalities reduce by more than 50% over the last twenty years.

Other key figures show that: 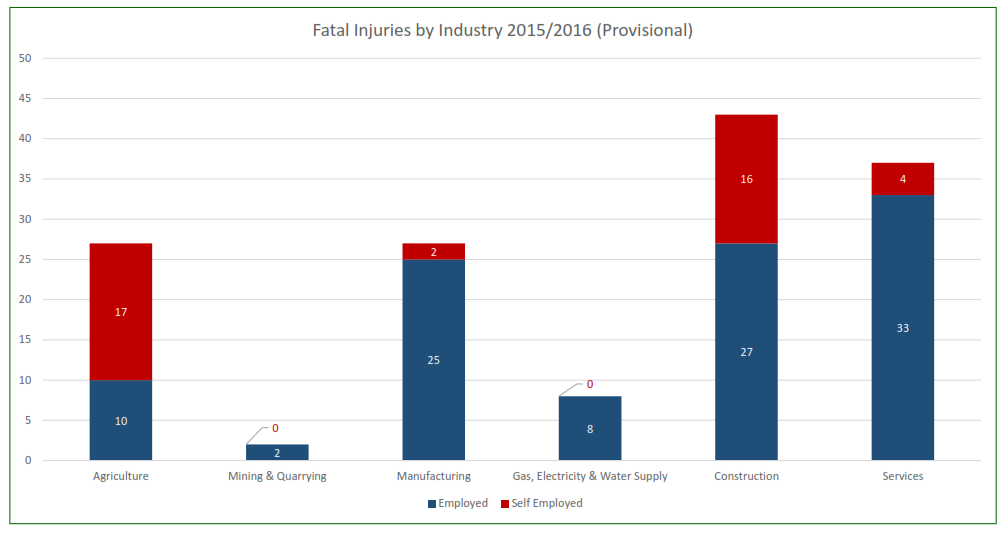 Martin Temple, HSE Chair said, “One death at work or life needlessly shortened, is one too many and behind every statistic lies a real story of loss and heartbreak and families left to grieve. Britain has one of the best health and safety systems in the world, but we should always be looking to improve and to prevent incidents that cost lives.

This year HSE travelled the country asking industry representatives, employers, unions, workers and others what they could do to help GB work well. The response was hugely encouraging and I would like to ask people to deliver on the commitments made, that will help keep Britain’s workers alive.”

Construction union UCATT criticised the timing of the release of the HSE statistics. Acting General Secretary Brian Rye said: “This is clearly a case of burying bad news. At a time when we have huge amounts of political turmoil and the Chilcot Report finally being published, the HSE decided to publish the latest fatality figures. They have effectively brushed them under the carpet. They could and should have waited just a single day.”